The DomainWire Global TLD Stat Report (Q2/2017) is now available. The report covers the global status and registration trends in all top-level domains (legacy gTLDs, new gTLDs and ccTLDs) with additional focus on the European ccTLD market. Note that in contrast to previous editions, some of the growth  calculations will now use year on year (YOY) rather than the quarterly.  Highlights from the report: 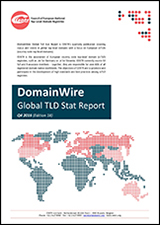 Overall Market
- Global domains (all TLDs ) are at 312 million - combined growth of 1.9% YOY.
- Highest gains were made in Asia Pacific ccTLDs (mostly .cn) followed by the new gTLD category which grew around 2 million.
- Market share of new gTLDs is 7.5% of global domain names however has not increased significantly over the past year.

European Market
- Combined growth of 56 European ccTLDs over 70 million domains was 1.5% YOY. The declining trend in median growth continues although at a slowing pace.
- ccTLD domains make up 58% of all registrations in Europe with gTLDs taking the rest (39.5% legacy gTLDs and 2.7% new gTLDs).
- Registrations made by Chinese registrants into European ccTLDs have been declining since the beginning of the year.
- Average ccTLD renewal rate was 83% (Jul 2017).

gTLDs
- gTLDs grew 1.1% year on year.  This mostly came from new gTLDs as only several legacy gTLDs saw positive growth (.com 1%, .info 8%).
- Among new gTLDs .loan continues high net growth as one of the larger TLDs based on non-parked domains.
- Average gTLD renewal rates have decreased over the past year contributing to declines in some gTLDs.